It’s Election Day! While many eligible voters are headed to the polls today, our young scholars at Tanglen Elementary held their own mock election last week to get a better understanding of the election process and practice for when they become eligible to vote in a real election.

When fifth- and sixth-grade teacher Kye Nicholls heard that the Minnesota Secretary of State and the Center for Youth Voice were offering free materials to sign up for a K-12 mock election, she thought it was a great opportunity.

"I think it’s important to engage elementary students in the election process," Nicholls said. "It’s practice. Practice for when it’s time to act as a citizen eligible to vote."

In tandem with the mock election, Nicholls engaged her social studies classes with a focus on the history of equal voting rights. In addition, the class received a visit from School Board member Shannon Andreson who talked to them about the ways they can share their voice now.

"We focused on changemakers that are children and the impact they've had on our world. It is my hope students will see themselves as valid voices and find adults who will listen," Nicholls said.

The mock election also presented a good opportunity for Nicholls' students to practice their leadership skills. The fifth- and sixth-grade students were in charge of handing out ballots and showing other students where to cast their vote when they were done filling out their ballots.

In the Tanglen Elementary election for the Minnesota governor and lieutenant governor, a total of 350 votes were cast. Tim Walz and Peggy Flanagan received 52 percent of the vote, followed by Gabrielle Prosser and Kevin Dwire with 15.7 percent. Scott Jensen and Matt Birk received 12.3 percent of the vote. 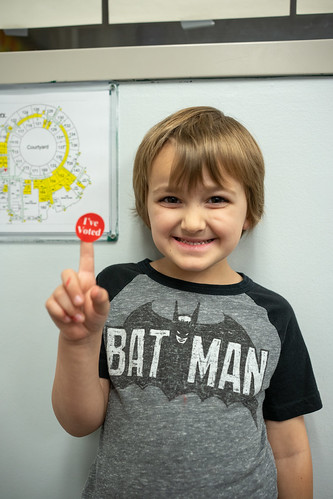