Chinese college interns assist in XinXing classrooms for a month

XinXing Academy students and Chinese interns were immersed in a cultural exchange for the past month. A group of 16 Chinese college interns helped teachers in XinXing classrooms through a partnership with Nanjing Xiaozhuang University in China.

The interns are studying to be teachers at their Chinese university. The goal of the program is to provide Chinese language and cultural resources to Chinese programs here, while offering the students from Nanjing University the opportunity to learn about the American educational system.

“We always like to have extra help in our classroom but in America not many people can speak Chinese, so we needed some native Chinese speakers come to the room to help our kids to learn Chinese,” said Donghong Wang, kindergarten teacher at XinXing.

The Chinese interns were impressed with the Chinese language skills of our students. The students didn’t just listen when the native Chinese speakers said something, they were able to have a conversation. Ye Xiaofan, one of the Chinese interns from Nanjing University, said the student’s Chinese comprehension was fascinating.

The interns assisted classroom teachers by reading stories to the children, preparing teaching materials, and working one-on-one with students in need of extra help. An exchange of culture was prevalent in many of the XinXing classrooms as interns shared their culture with students through calligraphy, paper-folding, traditional Chinese dance, cooking, and more.

In the same respect, the interns learned from both the teachers and students. Xiaofan said it was the first time she had experienced an American classroom. She thought the education was a lot more flexible compared to China. The classroom sizes in China are much larger, so there is not as much opportunity to do activities or work in small groups.

On March 12, Eisenhower Elementary principal Paul Domer and K-12 world language and immersion coordinator Molly Wieland celebrated the success of the internship program with a small ceremony. The interns were honored with certificates of internship completion and one of the Chinese interns read a speech about the program experience.

“Not only me, but also other schoolmates have learned a variety of things,” said Yu Jin, Chinese intern from Nanjing University. “We have gained a lot. This internship is very effective, which will have a deep impact on our further career.” 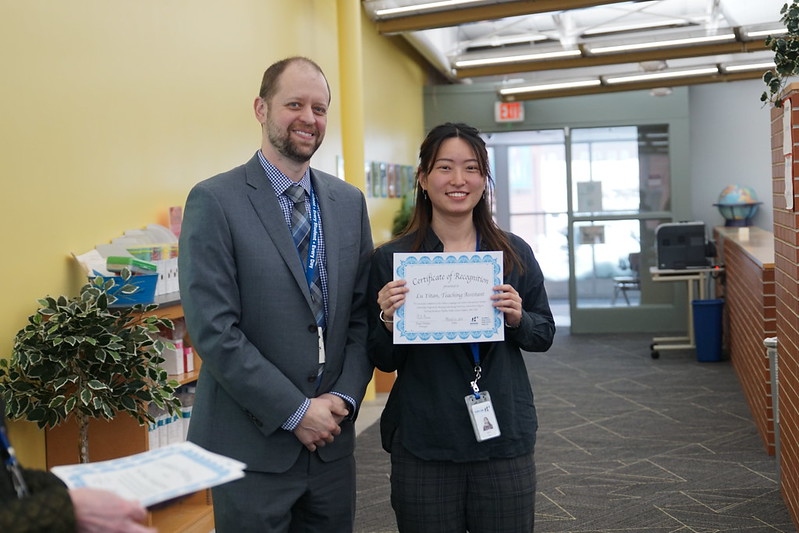